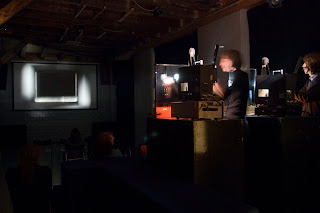 Sandra Gibson and Luis Recoder's work makes light almost seem physical, and it reminds us of the typically hidden aspects of cinema - the projectionist, for example - and revels in the profound pleasures of the basic mechanics and transformative powers of the essential qualities of of cinema In place of a description or review, then, I offer answers to some questions I asked Luis and Sandra about their work:

How does a project take shape? How do you plan or prepare for a performance? Is there a script?

Projects take shape from project to project, from show to show, from 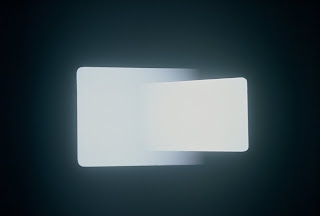 one end of the collaboration to the other, from one audience to the other, etc. The work reverberates or ricochets in the in-between.

There is no written script for the performance. There are a certain number of movements, gestures, paths that improvise their way through the individual work, the temporal passagework.

Would you say that your work participates in, continues or redefines an existing tradition? I'm curious about how you see your work in relation to other work and practices...

We hope that the work participates in elaborating the tradition. Not traditionally but controversially, that is by throwing it - literally projecting it - into relief and dispersing into the scattering wind conventional notions accumulating around the so-called tradition.

What actually happens for you during a performance? Is it relatively simple from your perspective, or is it an active, unfolding event?

We try to imagine what it is like to attend such a screening. What is the audience expecting, or not expecting? What remains to be seen or not seen? Every step or transition steps into the spectator.

To set up the spectatorial imaginary: to assume the role of the one who arrives early, the one who arrives late, in the middle (always in the middle), and who is always already leaving early. To identify with all aspects of this hesitancy that knows nothing but beautiful radical indecision.
From an interview with Holly Willis:
http://www.kcet.org/socal/voices/beautiful-radical-indecision.html 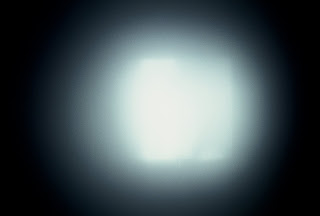 Sandra Gibson and Luis Recoder originally met at the 2000 International Film Festival Rotterdam where they each screened their work. Since then they have been collaborating on performances and installations using the film medium as their modus operandi. Their work has exhibited at major art museums and film 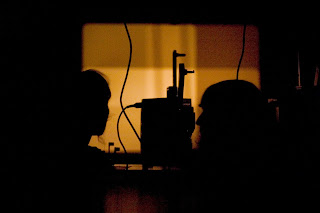