PROGRAM:
FF (Fuckface)
(1986) Super 8 to digital sound, 10 mins
FF is put together in such a way as to generate miniature, almost instantaneous fictions, confined and numerous, where meaning can occur between the frames as much as it might in the frame. While the movements and the pace of the film suggest relentlessness and insistent control, the assembly of images serve to illustrate a nervous breakdown of the characters represented as their actions, forced into repetitions, lose their original expression. The original condition of the found footage (damaged, scratched, etc.) and the method and process of rephotographing it are intended to be as much a vital part of the film as is the content re-represented. (FF is originally known as Fuck Face).

Deliquium
(2004) 16mm, sound, 15 mins
(a description is in the form of a question posed)
“Deliquium feels like a very personal work, though it deploys not untypical collage collisions, marrying moments of the natural world (speared fish, floating seahorses, fallen trees and blue butterflies) with human designs (artificial snow, divers, boats, but most often: men at work in factories). The natural world is fallen and speared and fragile, while manufactured landscapes turn humans into factory products. Into this mix there are photographs which struggle to be seen, negatives and home movies which blink in and out of darkness, delivering a sense that you are recalling a family here, that the factory workers have familiar names, that you are describing a generational struggle. Are you telling your story by showing us the work of others?“
-Mike Holboom

Frequency Objects
(2014) Digital, sound, 5 mins
Frequency Objects combines negatives of old family photographs, found fragments of movie film, and photograms of objects’ shadows, all strung together on a reel and observed with a video camera in a stop/start procedure. This “bench winding” technique (a routine method in filmmaking for locating shots) allows a chance element to play in the catching sight of image fragments; souls half in and half out of the frame, things out of focus, carefully staged shots, faces known and unknown, suddenly happened upon, all in a run-on train of exposition in re-animation. The weave pattern is silk fabric 'photogrammed" producing a to-scale shadow of itself.

Untitled (earth)
(2015) Digital, sound, 10 mins
Untitled (earth)is a rhythmical-graphical treatment of 35mm film material that destabilizes the narrative form. Comprehensive film images fuzzed out to a haze, melting slowly in soft pink abstracts, but still recognizable. The film image (a tangible container made on light sensitized substrate) is unraveled and reassembled through electronic frame capture. Figures in landscapes rolled past the video lens, the nuance of their gesture still readable. Any parts that are ambiguous the imagination simply fills in. 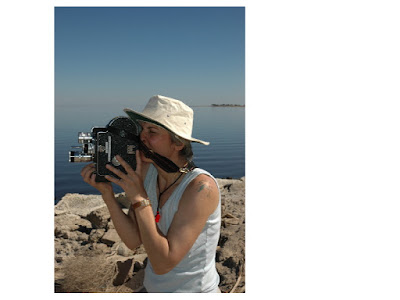 Distance
(2010) 16mm, sound, 12 mins
DISTANCE, the film, shows time spent at two shores, one thinly populated, the other a wasteland, joined by the interluency of various paths taken, each bit real enough, though exact measures being obscurely indicated. Notions of home and its ache are, to borrow a phrase, “not capable of being told unless by far-off hints and adumbrations.”


Julie Murray was born in Dublin, Ireland. In 1985 she moved to the US where she began making experimental films. Continuing to work in and draw relationships from painting and photography she has completed many short films and has collaborated on numerous film installation/performance events with artists, musicians and filmmakers.
Her work has been included in the New York Film Festival, Images Festival in Toronto, the Rotterdam International Film Festival, and was exhibited at the Whitney Biennial in 2004. Along with screenings at the Museum of Modern Art, NY , the San Francisco Cinematheque and the Pacific Film Archive in California, Murray has been invited to present her films at the Art Gallery of Ontario Cinematheque in Toronto, at Anthology Film Archives, New York., Hallwalls, NY, Los Angeles Filmforum, SF Cinematheque, Pacific Film Archives, and has been a guest artist at various universities. Outside of the United States her films have been screened in programs at Centre George Pompidou, Paris, the Museum of Strasburg, the Dublin Film Festival and the London Film Festival.
She has curated programs of films including a selection for the Experimental Film night at the New York Women's Film Festival, the New York Filmmaker's Co-op 35th Anniversary series and for a 2005 Canyon Cinema/San Francisco Cinematheque collaboration. She was artist-in-residence at LIFT (Liaison of Independent Filmmakers of Toronto) 2013 and at Mobile Frames in Windsor, CA in 2014 and most recently at MacDowell Colony.
Film prints of Julie’s films are at The Museum of Modern Arts Film Archives as well as the Whitney Museum of American Art and are in the NewYork Public Library's Special Collections, NYC. Murray's early super-8 films were selected for a National Film Preservation Foundation Award in 2014.
Posted by Kim Keown at 3:57 PM