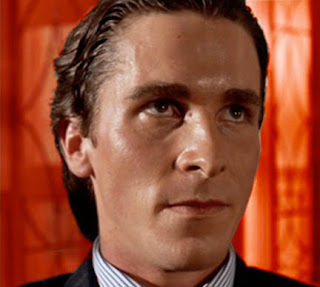 AMERICAN PSYCHE: The Cinematic & The Civilized A Powerpoint presentation which attempts to invoke American Psycho's immortal Patrick Bateman and study his relationship to the state of souls in a soulless environment. As the möbius strip of media and reality binds us to delusion and denial, it can also carry cosmic messages. Video clips, primitive sketches, live narration, charts and graphs help illustrate the nature of Modern Civilization and how the fate of Christian Bale may be tied to our own. This occasionally- awkward, whirlwind lecture includes some violence and nudity, very little intellectual terminology, time for Q&A and perhaps meditation.

Artistically Brittany Gravely has focused primarily on 16mm film for the past several years, but also creates works in sound, video, installation, and many media of the second dimension. She graduated in 2001 with an MFA from the School of the Museum of Fine Arts in Boston. Her films, for which she is the writer, director, editor and sound designer include 2001’s Introduction To Living In A Closed System (New York Film Festival, Images Festival, MFA Boston, videoex, New York Underground…) and Blood of the Earthworm of 2006 (T.I.E. Cinema, Black Maria, New York Underground, Antimatter, Chicago Underground…). In 2008, she and Jennifer Pipp formed Architecture of the Sun to accompany live music while manipulating dual 16mm projections and have performed in clubs and galleries in Brooklyn, Boston and Providence. Her latest experiment is a Powerpoint presentation on American Psycho. Recently certified in palmistry, she is also currently studying herbalism and devising therapeutic film projects. She lives in Boston and works at Documentary Educational Resources, an educational video and film distributor.
Posted by massartfilmsociety at 2:22 PM